Taking refuge in the Three Jewels 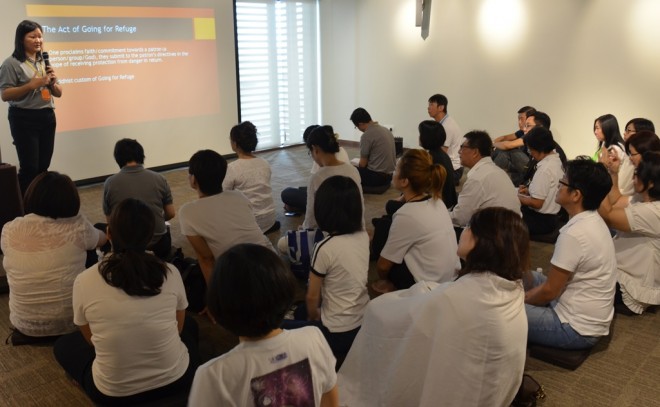 Sis. Buddhini giving a talk on ‘Going for Refuge’.

On Sunday 17 April, Sister Buddhini Tan gave a talk on ‘Going for Refuge’ to participants of BPS 033 ‘Buddhist Practice & Devotion’ course.  Sis. Buddhini explained that the practice of ‘Going for Refuge’ existed even before the Buddha’s time.  It was customary for a follower to proclaim his or her faith in the teacher or a higher power.

During the Buddha’s time, the custom was adopted by monks, nuns, male and female disciples of the Buddha.  For Buddhists, the ultimate and supreme Refuges are the Buddha, Dhamma and Sangha – collectively known as the ‘Three Jewels’.  Taking the ‘Three Jewels’ as our guide in life, we practise in order to be free from the dangers caused by greed, hatred and delusion. Sis. Buddhini explained that the practice of ‘going for refuge’ existed even before the Buddha’s time.

When one goes to the ‘Three Jewels’ for refuge, it is with the aim of applying the Dhamma to our daily lives and to seek protection from unwholesome qualities and mental states.  We are committed to put in the effort to practice and learn from worthy teachers so that we may come to realise the highest spiritual values which human beings can possibly attain.

We thank Sis. Buddhini for her informative sharing.  Sadhu anumodana.

Anchoring our lives with conviction

How to cope with fear, anxiety and uncertainty?