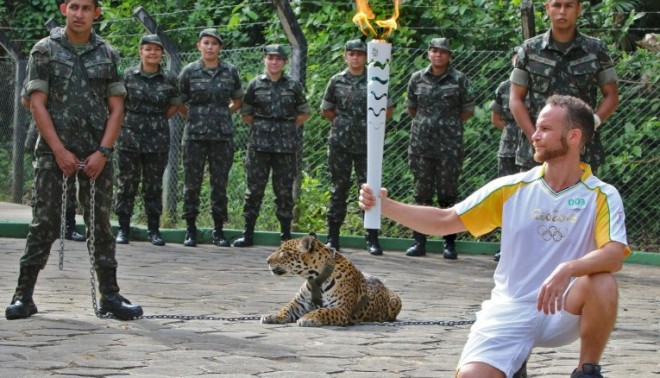 What has a chained jaguar got to do with the Olympic Games?

On Monday 20 June, a chained female jaguar named Juma was trotted out for the Olympic torch relay through the Brazilian city of Manaus, which begs the question, ‘why?’  What has a chained jaguar got to do with the Olympic Games?

The organizing committee of the Rio Games said it was “very unhappy” about it.  “We erred by allowing the Olympic torch, a symbol of peace and union among people, to be displayed next to a chained wild animal. That contradicts our beliefs and values,” the committee said in a statement to AFP.

Juma was raised from young in captivity at the Manaus Zoo.

Tragically, Juma the jaguar was probably spooked by all the fanfare and escaped her handlers.  In her bid to run away, she attacked a soldier.  She was shot and killed – an outrageous, needless death!

Jaguars are the largest felid in South America and an endangered species.  Their shrinking habitat is threatened daily by deforestation and human encroachment.  We pray that more people are aware of the value and rights of wild life, and stop degrading animals for our amusement and to serve our ego.  We pray that Juma’s unfortunate death was not in vain.

Let’s get active, not anxious