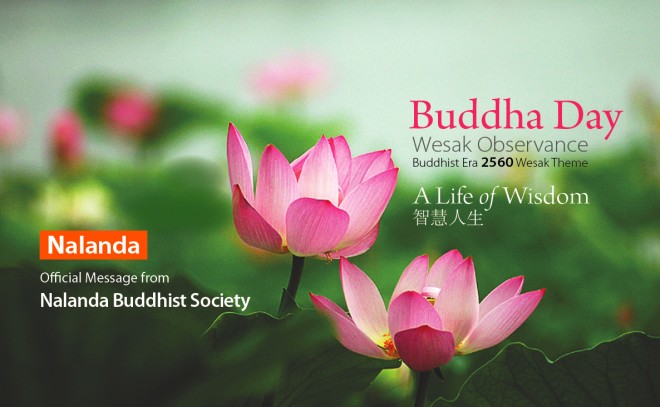 Namo Buddhaya!  This Wesak full-moon day, we celebrate the beginning of the Buddhist Year 2560.  On behalf of Nalanda Buddhist Society Malaysia, we would like to thank all our spiritual advisers, Dhamma teachers, benefactors, members and volunteers for your kind support in many ways towards our mission – to provide holistic Buddhist education to create a more integral and equitable society.

Sixty years ago, Buddhists celebrated the 2,500th Anniversary of Buddhism.  Many significant developments had taken place since then which dealt with challenges to institutional Buddhism in modern times.  As with all anniversaries, it is a good time now to take stock of Buddhism as a global religion, and to reflect on whether we are still practising the teachings according to what the Buddha had revealed.

The Buddha never intended His teachings to become a “religion” in the sense of an organised system of beliefs and rituals.

It must be stated that the Blessed One never intended His teachings to become a “religion” in the sense of an organised system of beliefs – with priests, temples, rituals, faith, membership, etc.  He constantly reminded His followers that His only concern was the eradication of suffering.  As a religion gradually evolved based on His Teachings, two paths emerged which were designed to help human beings reach the end of suffering.  The first was the ‘Path of Wisdom’ which was followed by his earliest disciples, and the second one – the ‘Path of Faith and Devotion’ which appealed to even larger number of followers.

As we ponder the state of human existence today we can note with concern that most religions in the world, including Buddhism, seem to emphasize the ‘Path of Faith and Devotion’ as an easier route to spiritual development.  Faith and devotion certainly have their benefits because they give joy and confidence to the ‘believer’.  But this path is fraught with dangers to the unwary.  This is because if faith and devotion are not guided by the restraining hand of wisdom, it often leads to dogmatism, bigotry and a zeal for religious persecution. 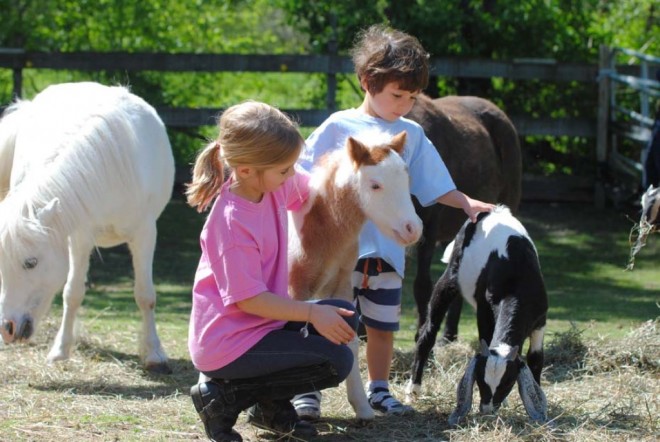 To qualify as humans, we must manifest compassion for every creature that shares the planet with us.

Even though Buddhists cannot generally be accused of resorting to violence in the name of religion, they must be reminded that whatever faith and devotion they exercise as part of their religious practice is nothing more than a means to an end – and that end is the development of wisdom.  Wisdom is the objective of Buddhist education and cultivation, and it culminates at the final goal of Buddhist practice – that is liberation from all suffering.

Humans are termed ‘manussa’, which means “one who has a mind to think”.  If we exercise our human intelligence and view the world with the right perspective, we stand to gain insightful wisdom into life.  And with wisdom comes its by-product: Compassion.  To qualify as humans, we must manifest compassion not only for fellow human beings but for every other creature that shares the planet with us.  Today we are witnesses to the sad consequences of the lack of wisdom, which in turn gives rise to the lack of compassion in the world.

As we celebrate the Enlightenment of the Blessed One with faith and devotion, let us also not lose sight of our ultimate goal to achieve wisdom.

The celebration of Wesak will, and must certainly strengthen our faith and devotion; but we cannot just stop there.  The Buddhist path to happiness entails the development of Morality, Tranquility and Wisdom.  Our faith and devotion, which is rooted in Morality (Sīla) should be used as a stepping stone to lead us to the attainment of Wisdom (Pañña), and thus insight into the true nature of existence, thereon achieving ‘Enlightenment’.

Let us during this sacred month when we celebrate the Enlightenment of the Blessed One with faith and devotion, also never lose sight of our ultimate goal to achieve wisdom.  With wisdom we can understand the true purpose of our lives.  We can live wholesomely and gain happiness here and hereafter, thus making this world a happier and more peaceful place.  May all beings be liberated from suffering.