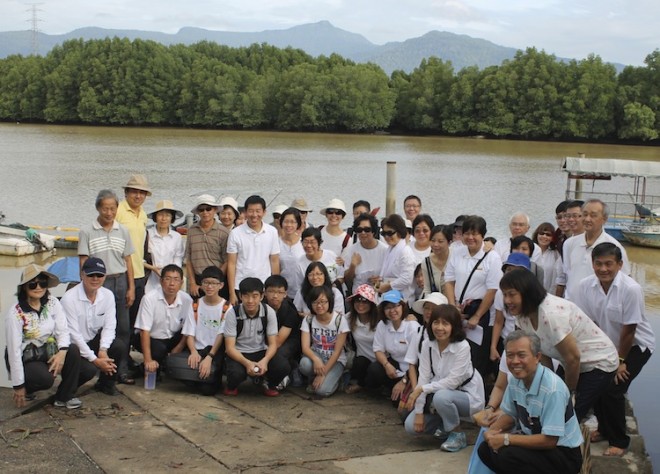 Visiting the Semeling Jetty, with Merbok River and Mount Jerai (also known as 'Kedah Peak') in the background. The peak was used by ancient mariners as a navigational landmark to enter the Merbok River estuary.

Nalanda Johor Bahru Branch members had a very enlightening and enjoyable 4-day study tour to Kedah and Perlis, from 22 – 25 November.  The entourage left NEO Centre in JB on 22 November and stopped over for lunch at our ‘spiritual home’ – Nalanda Centre Sri Serdang.  The group of 30 participants also visited the Buddhist Maha Vihara in Kuala Lumpur for a familiarization tour, thereafter left for Sungai Petani in Kedah.

On the second day of the study tour, the JB group was warmly welcomed by Kedahan Nalandians led by Chairman Bro.Khaw Seng Giap and Deputy Chairman Bro.Teoh Soon Liang; and together they visited the richest archaeological site in Malaysia – Bujang Valley in Kuala Muda District. 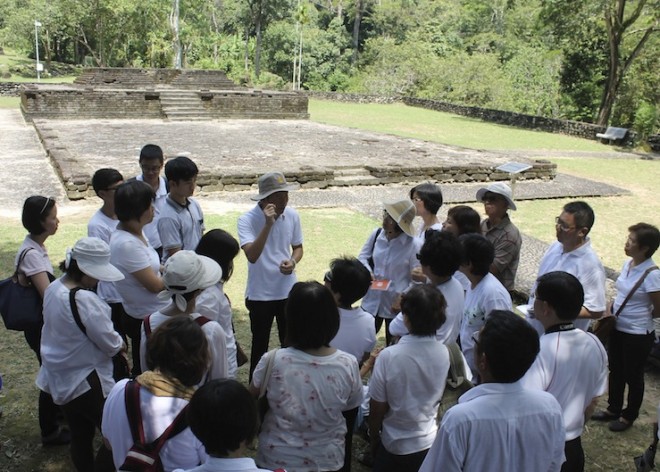 Bro. Tan led everyone on a superb tour of historical ruins, the Archaeological Museum, and Tanjung Dawai, where the Merbok River enters the Straits of Malacca.  Everyone was awed by the rich history and heritage of Bujang Valley civilization, hitherto unknown to many!

On third day of the tour, the group went to Perlis and Alor Setar, where they visited Gua Kelam, Kaki Bukit Buddhist Society, and Wat Nikrodham, as well as having a heritage tour of Alor Setar city centre.  Perlis Buddhist Society in Kangar generously hosted a sumptuous lunch with many local delicacies.  Bro.Tan took the opportunity to inspire undergraduates from UNIMAP (Universiti Malaysia Perlis), who were also there to welcome the Nalandian group.

The 'Secret Garden' in Gua Kelam is a luch and verdant sanctuary hidden amidst limestone hills in Northern Perlis.

This was the second study tour of the year organized for Nalanda Johor members, after the September tour to Borobudur.  After this remarkable trip, everyone is looking forward for more such tours to other historically significant places in Malaysia.  We fervently thank our Buddhist friends in Kuala Lumpur, Perlis and Kedah for kindly hosting the study group.  Sadhu anumodana!

What Buddhist Year is this?