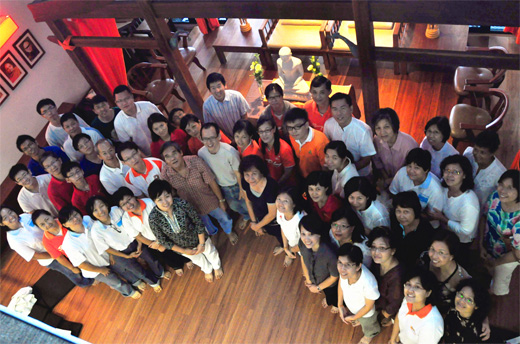 In November 2010, the Buddhist Community Alliance (BCA) Pāli Chanting Sub-committee was formed by representatives of all BCA member organizations to prepare a uniformed Pāli chanting script. The BCA felt the need to have a standard Pāli chanting book for its members, as most Theravadin Buddhist organizations in Malaysia chant differently from one another. The content of the BCA chanting script was edited by Bro. Tan Ho Soon and finalised in October 2011.

Following the compilation of the BCA Pāli chanting script, two chanting workshops were conducted by Bro. Tan on 20 November and 4 December 2011 for BCA members. The objective of the workshop is to introduce the proper method of Pāli chanting, as well as to explain the meaning of the verses chanted. Participants were encouraged to bring back what they have learned to their respective communities (such as Dhamma Schools) and teach others proper chanting. Many ideas and suggestions were discussed in the workshops, such as to incorporate sutta recitation in English and to use Pāli chanting as a teaching tool in furthering the understanding of Dhamma amongst devotees.