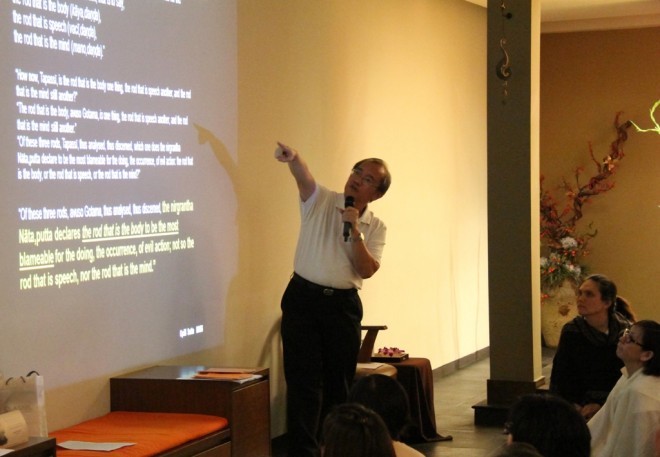 Director of Pustaka Nalanda, Bro. Ananda Fong, elaborating on the ‘Upali Sutta’ during the Dhamma talk.

The Āsālha full-moon day fell on Friday, 11 July this year.  This special day commemorates the anniversaries of the Bodhisatta’s Conception, His Great Renunciation and the Buddha’s preaching of the first sermon – the ‘Dhammacakkappavattana Sutta’ (Discourse on ‘Turning the Wheel of Dhamma’).  It was also on this day, too, that the Sangha was established and the ‘Three Refuges’ complete.

The Director of Pustaka Nalanda, Bro. Ananda Fong, gave a Dhamma talk during the evening Uposatha Service at Nalanda Centre, where he commented on the ‘Upali Sutta’ [Majjhima Nikaya Sutta no. 56].  The householder Upali engaged the Buddha in a series of discussions and was truly convinced; there and then he took refuge in the Buddha, Dhamma and Sangha.  Upali had investigated and understood the Dhamma well; hence his ‘Saddha’ (faith) was established with right understanding, and not based on ‘blind’ believe.

After listening to the talk, devotees were delighted with the proper understanding of ‘Saddha’, and inspired to further develop our faith in the ‘Three Jewels’.  Sadhu anumodana.

At the dawn of Enlightenment