Devotees listening joyfully to the Dhamma teachings by Bro Tan.

On Sunday 16 November, a fortnight after the successful hosting of ‘Xuan Zang – Journey to the West’ musical, a special Service Sunday and volunteer appreciation luncheon was held at Nalanda Centre.  The simple celebration was to express gratitude and appreciation to all volunteers who contributed towards the success of the Musical.  It was also an occasion to offer a special blessing service to Bro. Tan and his entourage who were leaving on a pilgrimage to India and Nepal the next morning.

Relating the selfless contributions of volunteers serving during the ‘Xuan Zang’ musical shows, Bro. Tan shared that we should “celebrate the ‘process’ rather than the’ success’ as it is in the ‘process’ that we ensure that things are done well and ‘success’ will be the natural result”.  He also urged everyone not to celebrate only what we have but to celebrate what we ‘do not have’ – to practise not having enmity, grudges, anger, fear and other defilements. 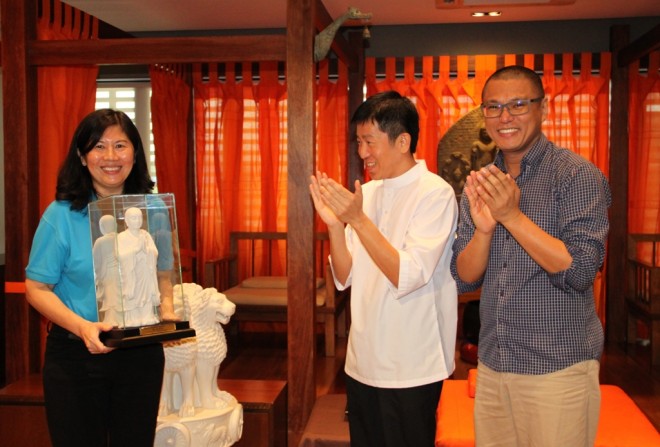 After the uplifting talk, everyone participated in the recitation of the ‘Karanīya Mettā Sutta’ and verses of blessings for the safe passage of Bro. Tan and his entourage.  Following that, volunteers were invited to share their experiences of serving during the ‘Xuan Zang’ musical shows.  Among those who were present were Datin Seri Kee and Producer-Lead Actor, Mr. Yang Wei Han.  Both shared their respective inspirations and experiences in bringing the musical to its successful staging.

Sis. Soo Cheng sharing happily on what she learnt from ‘Xuan Zang’ – the musical.

The programme concluded with a simple luncheon; food was served to nourish our bodies after our minds were nourished by the Dhamma and rejoicing in the ‘process’ of offering our selfless service to the community!

Bro. Tan in a group photograph with sponsors and members of Han Production, owners of ‘Xuan Zang – Journey to the West’ Musical.